Sergio Marchi was Canada’s Minister of Citizenship and Immigration from 1993-1995.

Borderlines · #46 – An Interview with Sergio Marchi, Canada’s Immigration Minister from 1993-1995

3:00 – Does someone keep the Minister title their whole life?

4:50 – What was the political consensus regarding Canadian immigration at the end of the 1980s? How did the Reform Party impact things?

8:00 – The mix of immigrants between economic, family and humanitarian immigrants.

11:15 – What dictates whether IRCC meets its level targets?

14:30 – The Brian Mulroney government was considering moving immigration under Public Safety. Under Sergio Marchi it instead became it’s on Ministry. What prompted this?

23:00 – Changes that Minister Marchi made to the refugee determination process.

25:00 – What was Minister Marchi’s approach to intervening on specific cases? When would Minister Marchi help Members of Parliament on constituent files? Did it matter which political party the MP was from?

32:00 – The impact of a police officer who was shot by an illegal immigrant on deportation policy.

36:00 – Whether the Canada Border Services Agency should be under the immigration umbrella.

37:30 – What Minister Marchi considers to be his main accomplishments and the implementation of the right of landing fee.

45:00 – Minister Marchi’s push to remove the Queen from the citizenship oath.

Syed Farhan Ali shares his Canadian immigration story. During the time that his spousal sponsorship application was in process he was denied temporary entry to Canada, missed the birth of his first child and missed her first steps. He recently arrived in Canada after a three year application process.

Chantal Dube is a Spokesperson for Spousal Sponsorship Advocates, a group with more than 5,000 members in Canada that argues for reforms to the family reunification process.

3:15 Said tells the story of his spousal sponsorship application. His application took 34 months to process. During the processing of his application Canada denied his visitor visa applications. He missed the birth of his children and their first steps, although he was able to reunite with his wife during brief trips to the United States, which did grant him a visitor visa.

21:00 We discuss the refusal of temporary resident visas for people with spousal sponsorship applications in process, people with frequent travel histories, people with American multiple entry visas, and judicial reviews.

29:50 Assessing genuineness in a spousal sponsorship application, and the distinction between “low risk and high risk” in the checklists.

15th Feb 2021 Comments Off on Delays in Claiming Asylum

The Federal Court decision in Calderon Garcia v. Canada (Citizenship and Immigration), 2012 FC 412 sets out the legal principles regarding a delay in claiming asylum. It states:

The Applicants assert that the Board erred in rejecting their claim based solely on the delay in claiming and a lack of supporting documentation. However, this position is not supported by the Board’s decision or related jurisprudence.

Delay in making a refugee claim “is not a decisive factor in itself” but it is a “relevant element which the tribunal may take into account in assessing both the statements and the actions and deeds of a claimant” (Huerta v Canada (Minister of Employment and Immigration) (1993), 157 NR 225, [1993] FCJ no 271 (CA)). It is reasonable to expect that the Applicants would make a claim at the first possible opportunity (see Jeune v Canada (Minister of Citizenship and Immigration), 2009 FC 835, [2009] FCJ no 965 at para 15).

While the Board implied that the nineteen month delay in this instance would be fatal to the claims, it proceeded to raise several other issues associated with the Applicants’ credibility,

Applying for a Permit When Country Conditions Are Not Good

It is generally regarded as difficult for people who are from countries with bad home country conditions to apply for permits.  Hamad v. Canada (Citizenship and Immigration), 2012 FC 336 is an example of how to put together an application that can overcome these issues.

When he applied, Mr. Hamad lived in Benghazi, Libya, with Ms. Mahmoud and their four children who were all under the age of ten.  They were all Libyan citizens.  In 2011, Mr. Hamad applied to study in Canada at George Brown College in a business administration-accounting program.

Mr. Hamad had two brothers living in Libya.  His third brother was a Canadian citizen who lived in Toronto and who testified that he was committed to supporting and financially assisting his brother’s family during their stay in Canada.  Mr. Hamad had previously traveled to Egypt, and in his application stated that he had visited his brother in Canada in 1991, on a visitor’s visa valid from January 24, 1991 to July 23, 1991, and that he left Canada before the expiry date.

The family had no debts, had a home, an orchard and a well in Libya.  Mr. Hamad also owned a transport truck and an interest in a building supply store.  He was the Head of Teaching Staff Human Resources, Faculty of Agriculture, Garyounis University in Benghazi, and his wife was a teacher.  Both of them arranged for leaves of absence from their jobs while in Canada.

IRCC refused the application.  The refusal was because the officer was not satisfied that the family would return to Libya after their visit.  In reaching this view,

» Read more about: Applying for a Permit When Country Conditions Are Not Good  »

Inadmissibility for Being a Danger to Canada

Section 34(1)(d) of the Immigration and Refugee Protection Act (the “IRPA”) provides that a permanent resident or a foreign national is inadmissible on security grounds for being a danger to the security of Canada.

Section 33 of the IRPA provides that the facts which can give rise to an inadmissibility under IRPA s. 34(1)(d) include facts arising from omissions and, unless otherwise provided, include facts for which there are reasonable grounds to believe that they have occurred, are occurring or may occur.

In Mugesera v. Canada (Minister of Citizenship and Immigration), 2005 SCC 40, the Supreme Court of Canada stated that the “reasonable grounds to believe” standard requires something more than mere suspicion, but less than the standard applicable in civil matters of proof on the balance of probabilities and that reasonable grounds will exist where there is an objective basis for the belief which is based on compelling and credible information.

While the phrase “danger to the security of Canada” must be interpreted flexibly, and while courts need not insist on direct proof that the danger targets Canada specifically, the fact remains that to return (refouler) a refugee under s. 53(1)(b) to torture requires evidence of a serious threat to national security.  To suggest that something less than serious threats founded on evidence would suffice to deport a refugee to torture would be to condone unconstitutional application of the Immigration Act.

» Read more about: Inadmissibility for Being a Danger to Canada  »

6th Feb 2021 Comments Off on Statistics on Asylum Claimants

In this page I will be posting assorted statistics on asylum claims that I find interesting.

2) Interesting chart showing asylum claimants based on country of citizenship and province of claim in 2013-14. 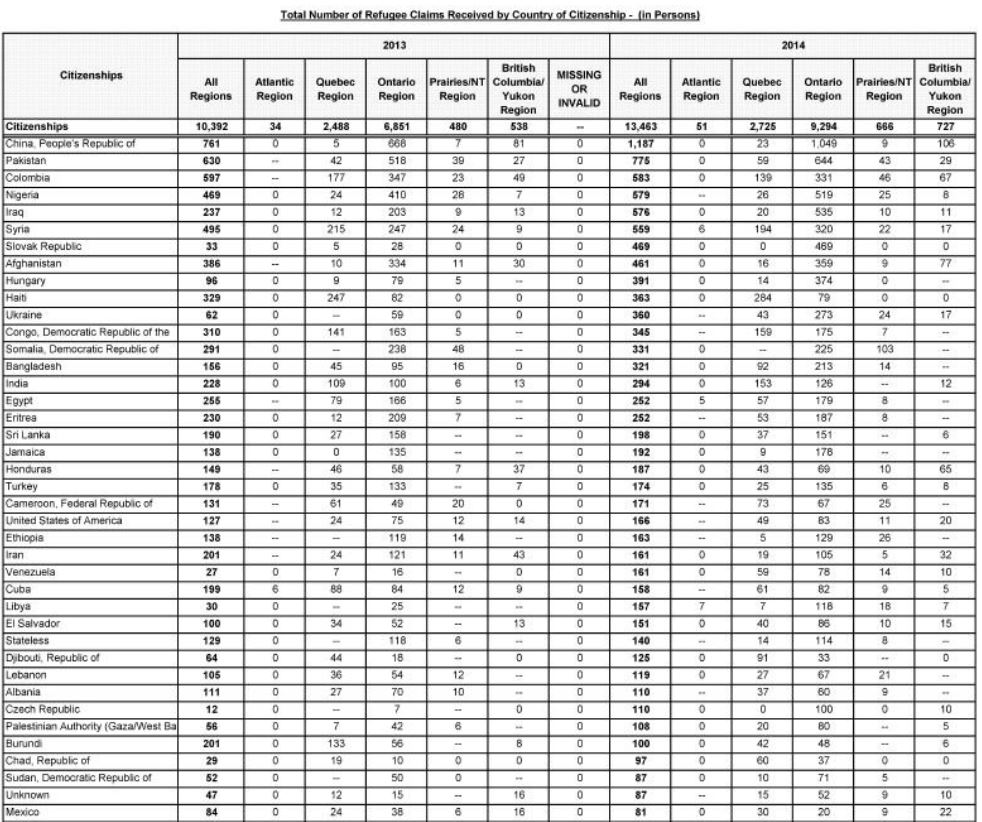 3) Charts Showing the Increase in Claims from Nigeria 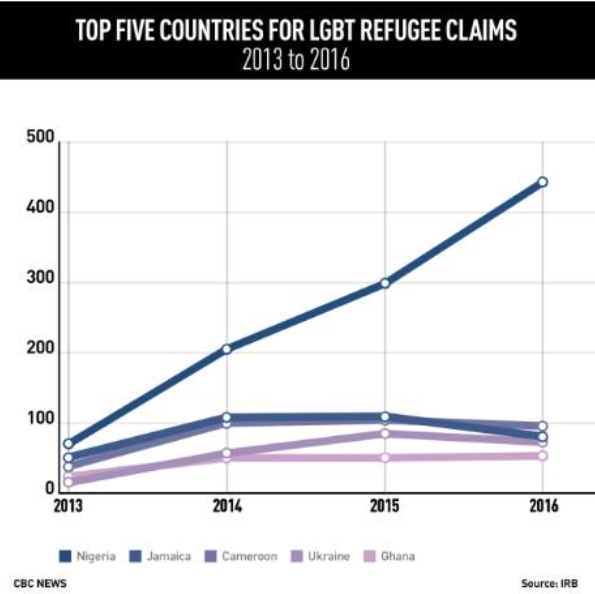 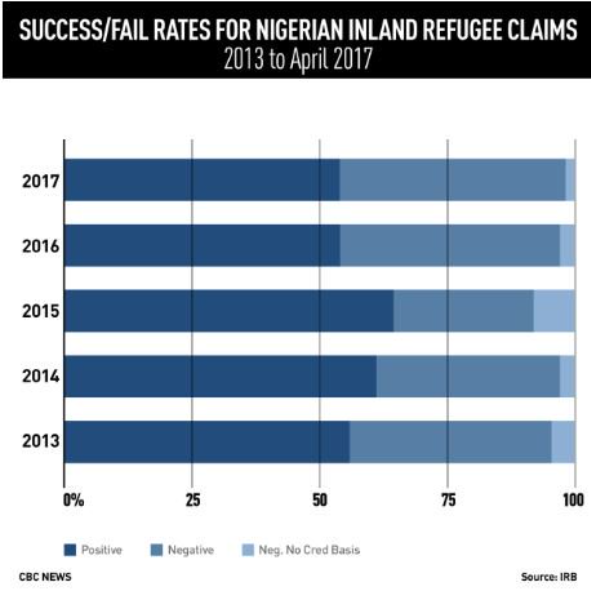