Immigration Approval Rate Based on Province of Destination 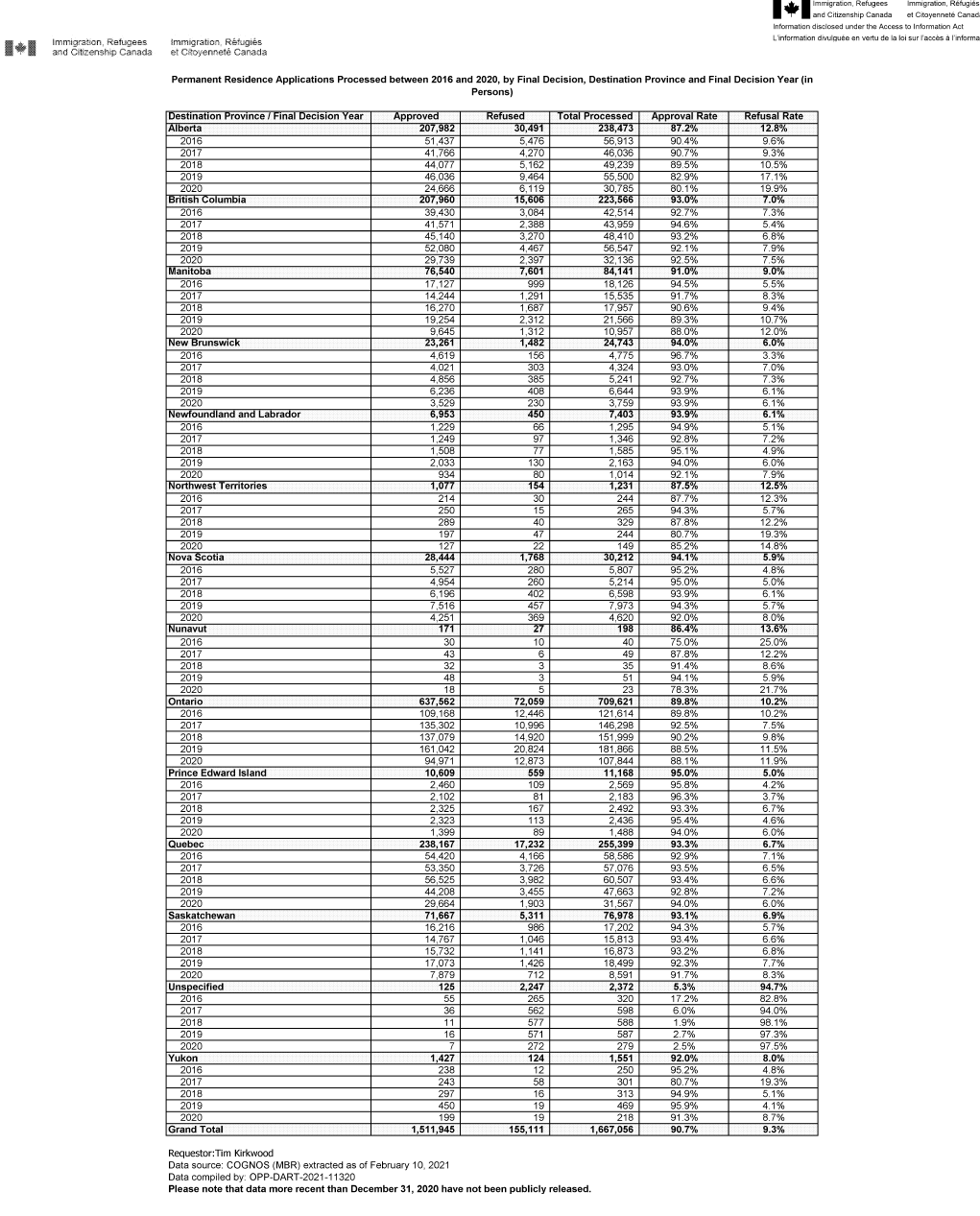 » Read more about: Immigration Approval Rate Based on Province of Destination  »

When people submit applications to Immigration, Refugees and Citizenship Canada they typically have spent significant time carefully completing forms and assembling documents. They expect that their applications will be processed by visa officers who carefully review the information before them.  However, applicants need to understand that their artificial intelligence is playing an increasing role in visa processing, as is the bulk processing of applications.

Why this is a timely matter to discuss

IRCC has not been forthcoming with how it uses technology to process applications, however, through a series of Access to Information Act requests as well as Federal Court of Canada litigation the public is beginning to get a sense of measures being implemented.

Automated processing of some categories of applications is not new.  Since 2015 most visa-exempt foreign nationals have had to apply for an Electronic Travel Authorization before they could board a plane to travel to Canada.  These applications were for the most part automated applications.

What is less known is that in 2017 IRCC successfully conducted a pilot in which automated systems based on predicative analytics triaged and automatically approved low-risk online temporary resident visa applications from China. Visa applications were sorted into tiers – the lowest risk for auto-approval, medium and high risk for officer review. This triage model was deployed for all applications from China in 2018, and in the same year was piloted in India.  The goal appears to be for artificial intelligence to automatically approve low-risk applications, with officers only manually assessing those that have been flagged as medium to high risk. 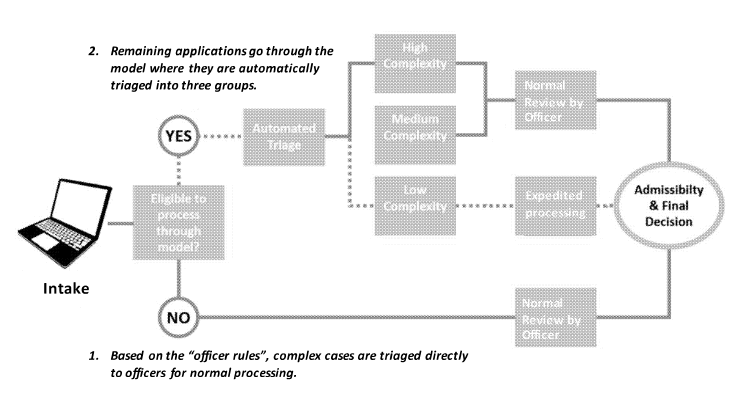 As of 2020 the analytics systems accelerate the eligibility approval of straight-forward cases. They do not refuse applications or recommend refusing applications (although presumably if a visa officer knows which tier an application is the officer might be implicitly swayed).

Borderlines Podcast #51 – Inadmissibility to Canada for Committing a Criminal Offence, with Sania Chaudhry

21st Nov 2021 Comments Off on Borderlines Podcast #51 – Inadmissibility to Canada for Committing a Criminal Offence, with Sania Chaudhry in Inadmissibility

A discussion of when someone can be inadmissible to Canada for having committed a crime which doesn’t lead to a conviction.

Borderlines · #51 – Inadmissibility to Canada for Committing a Criminal Offence, with Sania Chaudhry

2:00 Introduction and an overview of Garcia v. Canada.

15:00 The purpose of Canada’s inadmissibility provisions.

17:10 What is the standard of proof for determining that someone committed a crime where there is no conviciton?

30:30 Determining equivalency and issues with inadmissibility findings where there is no conviction.

46:00 Living in a society where the State makes everything a crime.

» Read more about: Borderlines Podcast #51 – Inadmissibility to Canada for Committing a Criminal Offence, with Sania Chaudhry  »

Borderlines Podcast #50 – Membership in a Terrorist Organization and Immigration, with Hart Kaminker

21st Nov 2021 Comments Off on Borderlines Podcast #50 – Membership in a Terrorist Organization and Immigration, with Hart Kaminker in Uncategorized

A discussion of s. 34(1)(f) of Canada’s Immigration and Refugee Protection Act, which provides that a foreign national or permanent resident is inadmissible for being the member of an organization that has committed terrorism. Topics include how terrorism, organization and membership are defined, the Proud Boys, QAnon and the Bangladesh Nationalist Party.

Borderlines · #50 – Membership in a Terrorist Organization and Immigration, with Hart Kaminker

5:45 What is terrorism under Canadian immigration legislation?

29:00 Would Nelson Mandela be encompassed?

30:45 Should only organizations that are officially designated by the government render someone inadmissible?

53:45 Could someone being a QAnon adherent make them inadmissible to Canada?

1:00 Does the designation of the Proud Boys broaden what could result in inadmissibility due to terrorism?

1:03 Could the leader of a party calling for an insurrection lead to all members of that organization being inadmissible for being a member of an organization which has committed terrorism?

1:05 What about antifa? The Republican Party?

1:13 Would it be misrepresentation to not declare one’s being a QAnon adherent in the IMM5669?

» Read more about: Borderlines Podcast #50 – Membership in a Terrorist Organization and Immigration, with Hart Kaminker  »

This episode is about the concept of a universal basic income and how it would work in Canada. We are joined by Sheila Regehr and Sameer Nurmohamed of Basic Income Canada Network.

We discuss which type of immigrants (permanent residents, workers, students, asylum claimants, people without status) etc. would be eligible, whether a basic income would impact other public funding for services like legal aid, whether it would cause inflation, and more.

5:30 What are different models of universal basic income?

9:00 How is the amount of basic income calculated?

10:45 What was the Ontario pilot project?

12:45 In practice is there a difference between an income guarantee model and a flat-payment model?

14:30 Do wealthy people get the same payment and benefit under a universal basic income?

15:30 How would a universal basic income be funded?

23:45 Would a universal basic income replace other services like legal aid?

42:00 What would the labour market interaction be with a universal basic income in terms of its impact on wages?

47:30 How have the impacts of the CERB impacted peoples’ perspectives on how a universal basic income would work?

56:00 Would a guaranteed basic income cause inflation or people gauging marginalized individuals?

Students are required to demonstrate financial sufficiency for only the first year of studies, regardless of the duration of the course or program of studies in which they are enrolled. In other words, a single student entering a four-year degree program with an annual tuition fee of $15,000 must demonstrate funds of $15,000 to satisfy the requirements, and not the full $60,000 which would be required for four years. Officers should be satisfied however that the probability of funding for future years does exist (i.e., parents are employed); scholarship is for more than one year. Applications for extensions made to CPC-E must also meet this requirement.

In assessing the adequacy of a student’s financial resources, officers may exercise discretion in the documentation they request from applicants. In situations where student applicants generally pose a very low risk regarding funds, officers may choose to limit or waive routine requirements for documentary evidence. Low-risk applicants are more likely to be exempted from the requirement to obtain a temporary resident visa. Based on the known incidence of indigent and non-bona fide applicants, reliability of financial documentation, and so forth, individual visa offices are best placed to determine whether routinely requiring banking documentation and/or more extensive financial background information is necessary to ensure program integrity. Students from developed countries who are both visa exempt and from socio-economic backgrounds similar to Canada might only be required to state their available funds.

Conversely, in some very high-risk environments, requiring and systematically verifying substantial history of funds and supplementary individual or family financial and employment documentation may be necessary to ensure that only genuine students capable of supporting their program of studies are accorded study permits.

Officers may take into consideration such sources of funds derived through scholarships,

E-mail Sent to IRCC Not in the File

The Federal Court of Canada determined that the onus was on the applicant to show that a document was sent.

The Applicant as proof attached an affidavit stating that an extension request letter was sent as an attachment to an e-mail on January 2, 2020. They also included as an exhibit a printout from the Applicant’s spouse’s Gmail account, showing an unlabelled message from January 2, 2020 at 08:42 to an IRCC e-mail address.

The Federal Court held that there were several deficiencies with this, including:

These all should serve as useful tips to applicants sending correspondence to IRCC.

» Read more about: E-mail Sent to IRCC Not in the File  »