Buying a Business that Has Foreign Workers

Buying a Business that Has Foreign Workers

As well, as explained in detail on the Immigration, Refugees and Citizenship Canada (“IRCC”) website, corporate restructurings, mergers and acquisitions may themselves trigger work permit-related issues for employer compliance.

It is accordingly important for all companies that are considering merging with or acquiring another company to consider whether (a) the transaction will result in the need for new work permits for existing employees and (b) whether the company that will be employing these foreign workers will become liable for any non-compliance of the previous entity.

Understanding the “Successor in Interest” Concept

While the IRCC website is clear that employers become responsible for compliance post restructuring, merger or acquisition, the issue of whether the new employers become liable for previous non-compliance is more nuanced, and depends on whether the new employer has become the “successor in interest” for the portion of the organization where the temporary foreign workers were employed.

A “successor in interest” occurs where the new company or the purchaser substantially assumes the interests and obligations, assets and liabilities of the original owner and continue to operate the same types of business as the original owner.  There is no fixed definition of what “substantially assumes” entails, but companies should consider whether the new entity post restructuring, merger or acquisition has assumed the current assets, long term investments, property, human resources, patents, accounts payable, current liabilities, long-term liabilities, and continued employment of employees.

Where there is a corporate restructuring, merger or acquisition, the holder of a Labour Market Impact Assessment (an “LMIA”) should contact the Department of Employment and Social Development Canada to inform them of the change.  Whether a new LMIA will be required will depend on a variety of factors, including whether the corporate restructuring, merger or acquisition impacts the prevailing wage, job description and job duties of a foreign worker.

The same is true for IRCC’s International Mobility Program (the “IMP”).  The employers of Intra-Company Transferees, for example, will need to determine whether a qualifying relationship continues to exist following a restructuring, merger or acquisition.  As well, after the restructuring, merger or acquisition the new employer will have to carefully review the terms and conditions on each foreign worker’s work permit to determine whether there are any limitations on changes to job title, location, wages and duties. If there are, then new work permits may be necessary, depending on the work permit program that the foreign worker is employed under.

There are several steps that companies can take to minimize risk when acquiring or merging with a company that employs foreign worker.

First, once the restructuring, merger or acquisition is done, then the new company may want to notify IRCC.  For example, if an organization changes its name or address, and there are no other changes to the structure of the company or to its Canada Revenue Agency business number, then the organization should contact IRCC to update their employer compliance portal information.  Where there is a change in CRA number, the employer should ask IRCC to link the new CRA number to their employer portal account. Requesting such changes do not delay the issuance of new work permits.

Second, prior to completing the purchase or merger, the organization should audit the other entity’s compliance with the employment of foreign nationals.  This includes obtaining a list of all foreign workers that the company has employed within the past six years (as this is the period that the government assesses), scrutinize whether the previous company complied with the laws regulating foreign workers and then determine what steps are needed going forward.

Third, the purchasing entity may want to contain in their purchasing agreement wording that indemnifies them of any non-compliance by the previous foreign worker.  For example, we have acted for purchasers where they successfully negotiated indemnifications against the consequences of any government inspections or audits of the new employer regarding the previous entity’s non-compliance, and also to cover the legal fees and costs of any voluntary disclosures to ESDC or IRCC had to be made following the discovery by the new employer of non-compliance by the previous employer.

Finally, where non-compliance is discovered, the purchaser should take detailed records, and consider making a voluntary disclosure to the Government of Canada. This could greatly reduce the consequences of non-compliance.

The consequences of not complying with Canada’s laws and regulations regarding the employment of foreign nationals can be severe, and include fines and prohibitions on hiring foreign workers.  Depending on the circumstances, existing work permits may be revoked. The purchaser of a business could find themselves financially devastated if, for example, the Government of Canada were to find them non-compliant.  For example, an individual who purchases a restaurant where all of the cooks are foreign workers could find themselves swiftly out of business if the previous employer’s non-compliance means that the new employer is both fined and prohibited from employing foreign workers.  As such, it is important that they take steps to protect themselves. 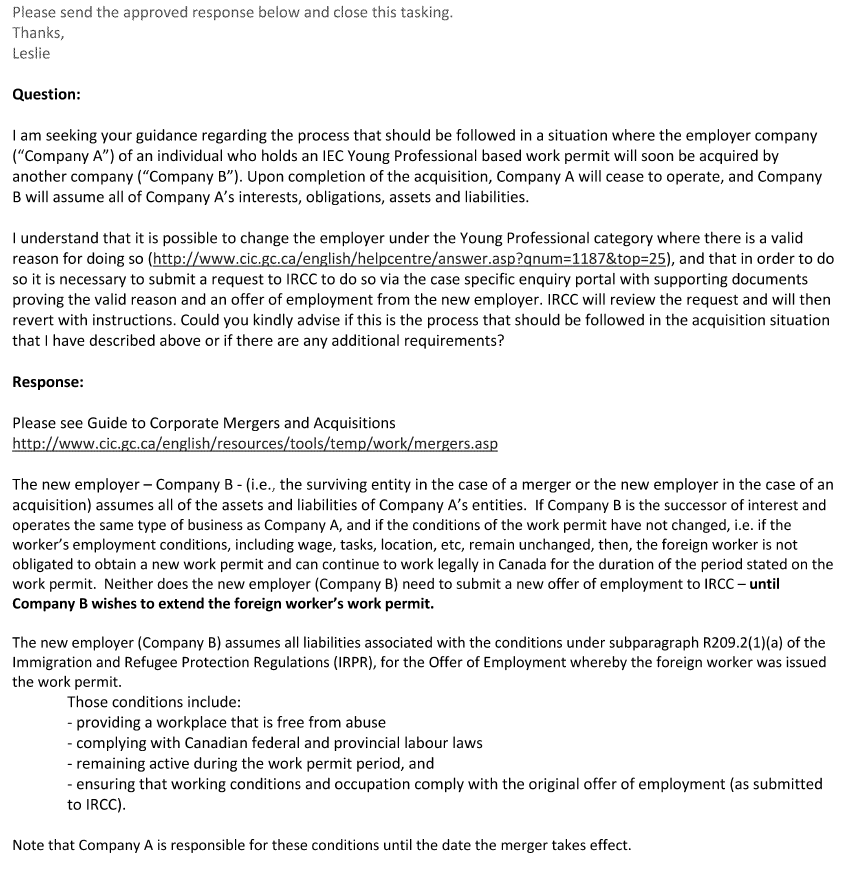