Informing IRCC of a Pregnancy

Informing IRCC of a Pregnancy

Immigration, Refugees and Citizenship Canada’s acknowledgements of receipts for permanent residence applications generally contain some variation of the following statement:

Please inform the visa office of any changes in your application (e.g. birth or adoption of a child, marriage or common-law relationship, new occupation or employer, change of address, change of e-mail address, change of immigration representative, etc).  Please include a letter identifying what the changes are and any relevant supporting documents.  If your documents are not in English or French, send a notarized (certified) translation with a copy of the originals.

16. (1) A person who makes an application must answer truthfully all questions put to them for the purpose of the examination and must produce a visa and all relevant evidence and documents that the officer reasonably requires.

(a) inform the officer if

(ii) material facts relevant to the issuance of the visa have changed since the visa was issued or were not divulged when it was issued; and

(b) establish that they and their family members, whether accompanying or not, meet the requirements of the Act and these Regulations.

It is also generally well-known that the failure to comply with the above may lead to a foreign national or a permanent resident being declared inadmissible to Canada for misrepresentation pursuant to s. 40(1)(a) of the Act, which states:

(a) for directly or indirectly misrepresenting or withholding material facts relating to a relevant matter that induces or could induce an error in the administration of this Act;

Regardless of what the legal answer may be (and I would argue that at this point it is unclear), both the Canada Border Services Agency, the Immigration Division, and the Immigration Appeal Division have found a permanent resident inadmissible to Canada for failing to declare her pregnancy at the time that she landed.  Alot of people on online forums are currently emphatically stating that there is no obligation for applicants to declare pregnancy.  Given that there has been at least one reported decision of a person being declared inadmissible to Canada for this, I would be cautious about making statements online. 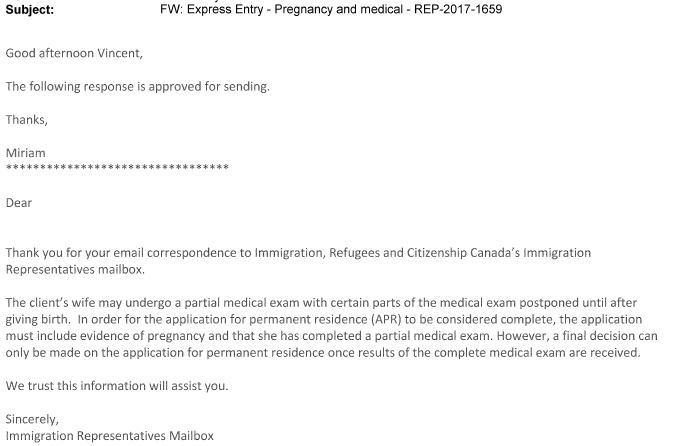