To qualify for the LMIA exemption, applicants must:

Here are some other key things to note about the program.
1. Recruitment through a francophone immigration promotional event coordinated between the federal government and francophone minority communities is no longer required.
Previously, participation in Moibilte Francophone was restricted to prospective foreign workers recruited through government promotional events. This requirement, which the government interpreted incredibly broadly in any event, is no longer the case.
Previously, the program worked as follows:
Mobilité francophone EN JUNE 2016
2. Habitual French speaking abilities are required, but not for the job.
To approve the work permit application officers must be satisfied that the foreign national’s habitual language of daily use is French.
Where the officer is not satisfied the foreign national’s habitual language is French, applicants may need to attend an interview or provide language results demonstrating an advanced intermediate level or above in French. An “advanced/intermediate” level is defined as Canadian Language Benchmark 7.
Importantly, the offer of employment in Canada does not have to require French language ability.
3. Applicants Can Apply at Ports of Entry
While Immigration, Refugees and Citizenship Canada initially said that applications had to be submitted online, many people recognized that this technically was not required by the legislation.  On May 28, 2019 IRCC revised its website to affirm that Mobilite Francophone work permits can be submitted by eligible individuals at ports of entry.
4. There is no corresponding program for anglophones seeking employment in Quebec.
The legal justification for providing preferential treatment to francophones intending to work outside of Quebec is based on s. 3(1)(b) of the Immigration and Refugee Protection Act (the “Act“), which states that one of the goals of Canada’s immigration system is:

(b) to enrich and strengthen the social and cultural fabric of Canadian society, while respecting the federal, bilingual and multicultural character of Canada;

Although there is no legal reason why this LMIA exemption cannot also theoretically apply to anglophones seeking employment in Quebec, people awaiting an Operational Bulletin to this effect hopefully know how to hold their breath for a long time.

5. The goal is to increase francophone immigration.

Mobilite Francophone corresponds with other advantages given to francophone individuals who are applying for permanent residency through Express Entry.

It is not hard to see why special programs are needed.

As the chart below shows, the percentage of immigrants of francophone descent outside of Quebec is around 1%. 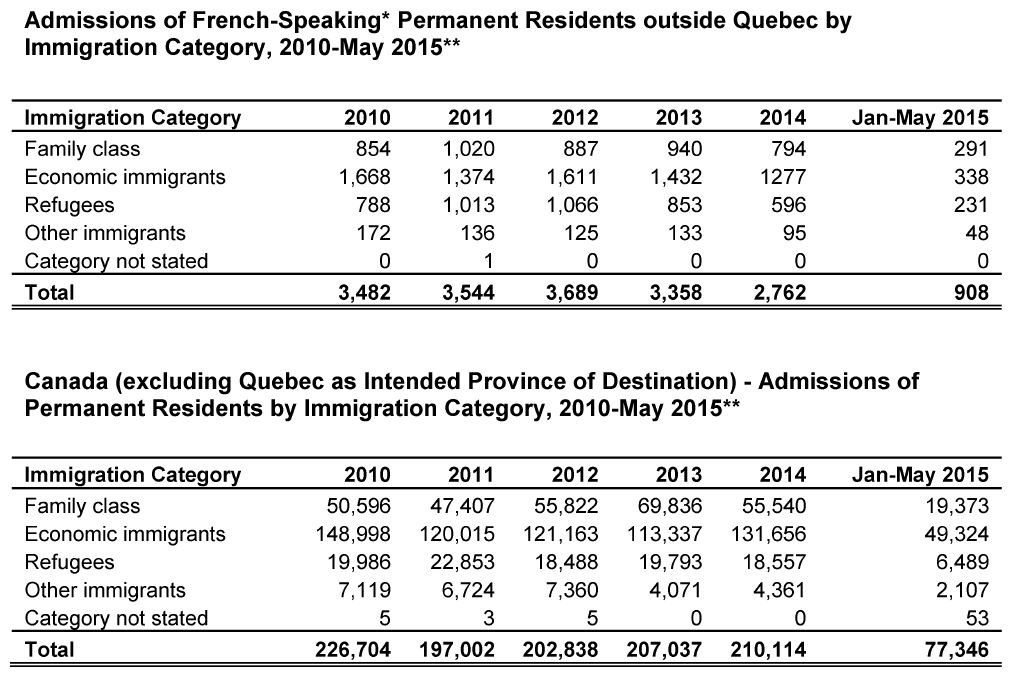