On June 9, 2012, the Government of Canada published regulatory changes in the Gazette regarding the Private Sponsorship of Refugees Program (“PRSP“).

Under the PRSP, there are three types of sponsors.  The first are Sponsorship Agreement Holders (“SAHs“).  SAHs are local, regional, and national incorporated organizations that have signed multi-year agreements with Citizenship and Immigration Canada for the purpose of submitting sponsorship cases on a regular basis.  The second are Groups of Five (“G5s“), which are five or more Canadian citizens or permanent residents who live in the applicant’s expected community of settlement who sponsor refugees.  They account for 40% of the PRSP.  The third are Community Sponsors (“CS“), which are organizations that have not signed formal agreements.

As of 2012, the PRSP has brought over 200,000 refugees and persons in refugee-like situations to Canada.  As the PRSP has grown, so too didthe backlog and the refusal rate.  Some missions abroad currently have waiting lists exceeding five years.  Excluding Iraq, the average G5 approval rate is only 37%.

The proposed changes to the PRSP were meant to address this.  The changes included requiring that the foreign national’s application for protection from abroad be submitted at the same time as the sponsor’s application.  As well, the proposed amendments would limit G5s and CSs to submitting applications for persons recognized by either the United Nations High Commissioner for Refugees (“UNHCR“) or a foreign state as a refugee.  An additional rationale for the changes to the PRSP to that in the Gazette can be found in the Memorandum to the Minister in which Citizenship and Immigration recommended the changes to Minister Kenney.


When the changes were announced, the Canadian Bar Association expressed concerns with the requirement that privately sponsored refugees had to be recognized as refugees by the UNHCR.  The Chair of the Immigration Section wrote:

UNHCR processing goes through three stages: registration; determination and referral. Referral numbers are artificially small because the UNHCR has difficulties in placing refugees. The number and types of referrals are influenced by willingness of resettlement states to accept referrals. Many refugees needing resettlement are not referred by the UNHCR.

Malaysia is an example of the problems which arise by requiring referral for government assisted refugees. There, the UNHCR determines many Sri Lankan Tamils to be Convention refugees, but refers almost none of them. This group is direly in need of resettlement, because Malaysia treats them as illegals, harasses them, detains them, does not allow the children to go to school, does not allow them to work, denies them medical care and so on. The UNHCR, realizing the limited global willingness to accept referrals, does not, with few exceptions, refer this population for resettlement.

This practice of non-referral plus the cap creates a dire situation for Sri Lankan Tamils, driving them into the hands of smugglers. The proposed regulation would make matters worse. The proposed regulation works at cross purposes with Bill C-31: it cuts off a legal means available to those without UNHCR or foreign state recognition, named group of five or community private sponsorship. It will accordingly increase the likelihood of smuggling.

In 2015, the image of a drowned Syrian child migrant, Aylan Kurdi, shocked the world. 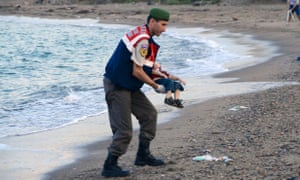 As was reported in several media outlets, Mr. Kurdi and his family were refused refugee status under the PRSP because they were not registered under the UNHCR.  It is apparently very difficult, if not impossible, for Kurdish refugees to be registered with the UNHCR.  The tragedy highlighted one of the negative consequences of requiring UNHCR registration for privately sponsored refugees.
Indeed, a chart contained in Citizenship and Immigration Canada’s 2013 Q3 Book of Basics on the number of applications to sponsor refugees appears to confirm that the 2012 regulatory changes caused the number of applications to plummet.  This, of course, was the intent.