In August, a ship carrying about 500 ethnic Tamils arrived in British Columbia. The event generated intense public interest, and the Canadian government even introduced human smuggling legislation that was viewed as a direct response to the mass arrival. Amongst this backdrop, the members of the Immigration and Refugee Board and the judges of the Federal Court set about their difficult task of determining the fate of these individuals. In December, the Deputy Chairperson of the Refugee Protection Division identified a particular member’s decision as being persuasive.

A persuasive decision is a decision that is considered to have persuasive value in developing consistent jurisprudence. They provide clear, complete, and concise reasons with respect to the particular element that is thought to have persuasive value, and consider all of the relevant issues in a case. Other members are encouraged to rely upon persuasive decisions in the interests of consistency. Although they are not binding, they are generally expected to be followed unless new evidence emerges, or if the particular circumstances of a case require otherwise.

Regarding the Tamils, the Deputy Chairperson of the Refugee Protection Division had this to say about the persuasive decision:

After due consideration, I am of the view that the reasons for decision in VA9-02166 are of persuasive value in regard to claimants from Sri Lanka seeking protection due to their fear of the Sri Lankan army, government officials and paramilitary agents associated with the Sri Lankan government as members of a particular social group, namely “young male Tamils from northern Sri Lanka”. The reasons cite the documentary evidence which relates to changes that took place in Sri Lanka recently and conclude with a finding that the changes are meaningful and durable and that the claimant’s fear of persecution based on his particular social group, perceived political opinion and nationality is not well founded. The decision highlights the fact that the risks associated with the security situation are faced generally by other individuals in or from Sri Lanka and that according to section 97(1)(b)(ii) of the Immigration and Refugee Protection Act, protection is limited to those who face a specific risk that is not faced generally by others in or from the country and thus, the claimant is not a person in need of protection.

This decision is of course unwelcome news to the hundreds of Tamil refugee claimants currently in Canada. It is important to note that the persuasive decision does not allege that these refugee claimants are not genuine. Nor does it opine that the claimants faced persecution in Sri Lanka. As the pictures below show, the situation in northern Sri Lanka in 2009 was terrible. 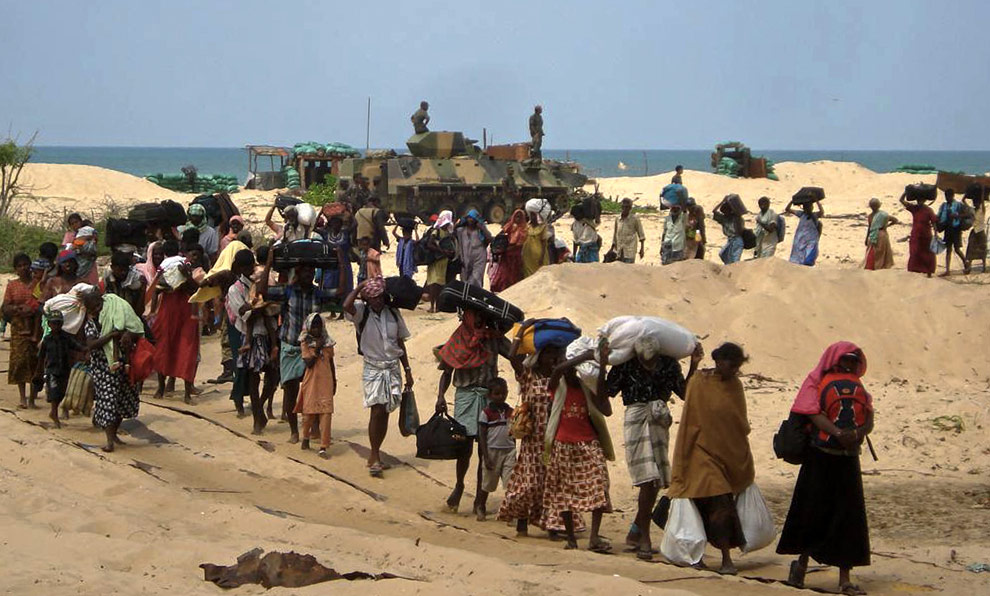 This handout photo released by the Sri Lankan Army on April 22, 2009 shows what is claimed to be civilians fleeing from an area controlled by Tamil Tigers in the northeast of the island on April 21, 2009. (AFP/AFP/Getty Images) 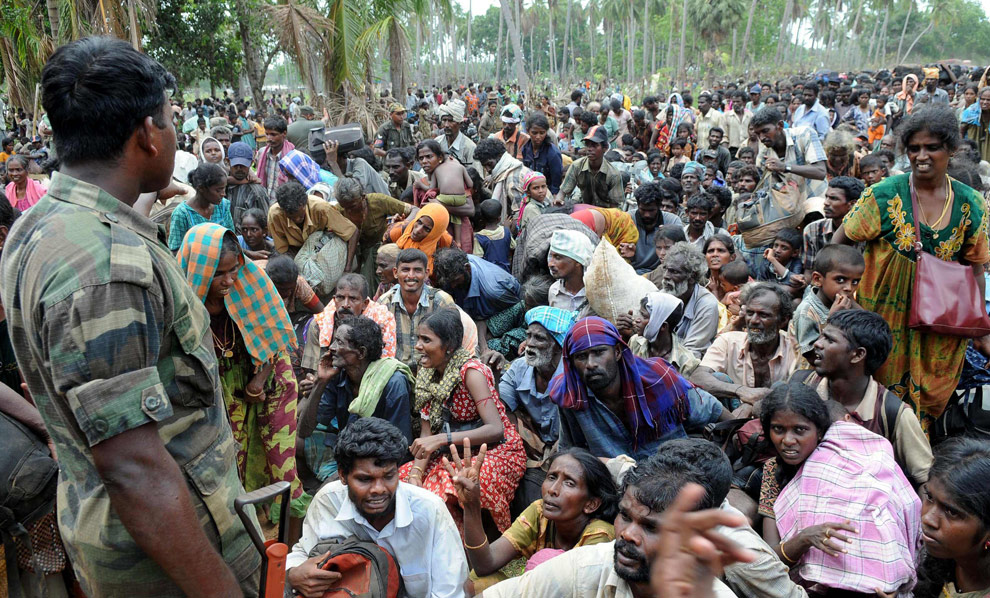 A government soldier looks over civilians who arrived east of the village of Putumatalan in Puthukkudiyirippu, northern Sri Lanka April 24, 2009 after fleeing an area still controlled by the Liberation Tigers of Tamil Eelam (LTTE). (REUTERS/Stringer) 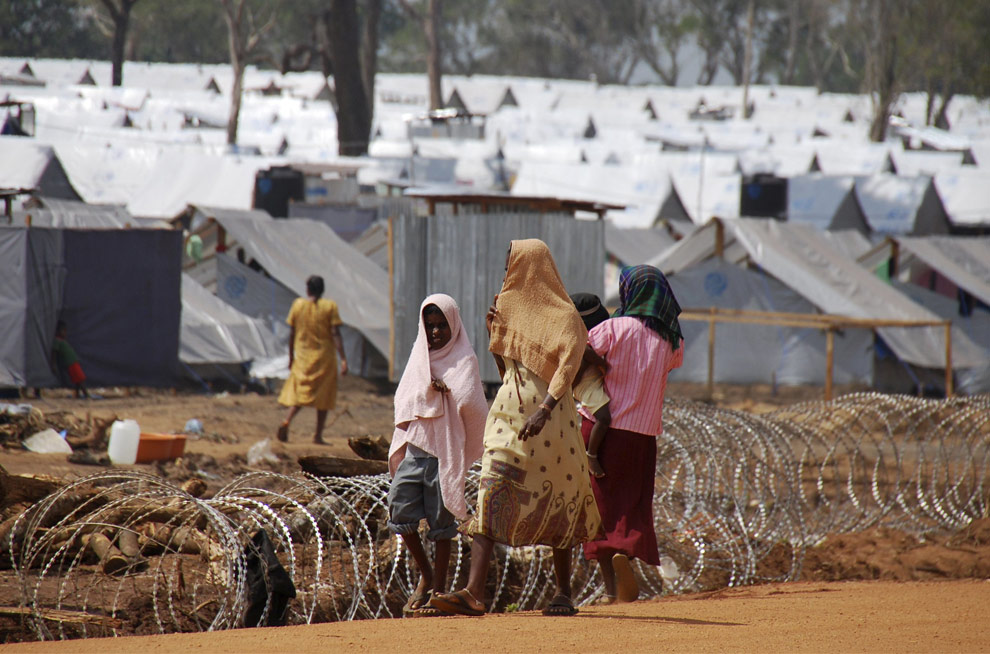 Ethnic women with children walk near barbed wire at an internally displaced camp set up for Tamils who escaped the war zone, in Vavuniya, about 254 km (158 miles) north of Colombo, April 4, 2009. (REUTERS/ Stringer) # 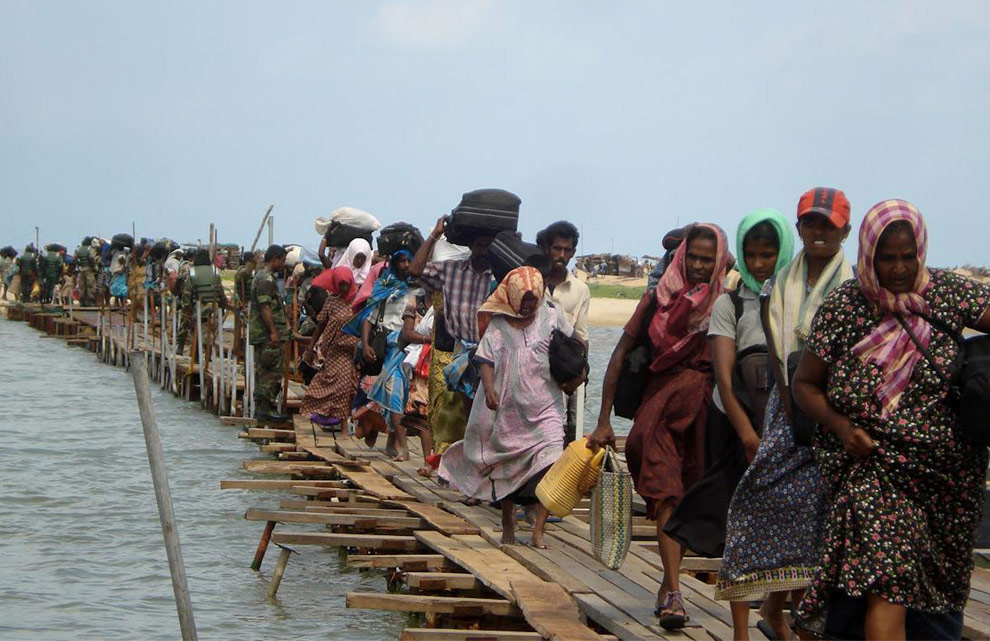 This handout photo released by the Sri Lankan Army on April 22, 2009 shows what is claimed to be civilians fleeing from an area controlled by Tamil Tigers in the northeast of the island on April 21, 2009. (AFP/AFP/Getty Images)

What the decision does find, however, is that the situation in Sri Lanka has improved, and that young, Tamil, men do not face a continued risk of perseuction.

Interestingly, the decision does carve out an exception, and notes that ongoing protection should probably be provided for the following individuals:

The UNHCR Guidelines specifically recommend ongoing protection for those persons with the following profiles: persons suspected of having links with the LTTE, journalists and other media professionals, civil society and human rights activists, women and children with certain profiles, and lesbian, gay, bisexual and transgender individuals.

The persuasive decision has already been criticized by immigration lawyers. I do not know if judicial review is being sought. However, while this decision is certainly not going to be the end of the debate, it definitely provides a significant challenge to individuals representing young, Tamil, male refugee claimants.

This is only the latest bad news for the arrivals of the MV Sun Sea.  As recently noted in the case Canada (Citizenship and Immigration) v. B236, a string of decisions stating that the arrivals should remain in detention for security and flight risk reasons has resulted in judges relying on the principle of judicial comity to approach the issue with a presumption of continued detention.